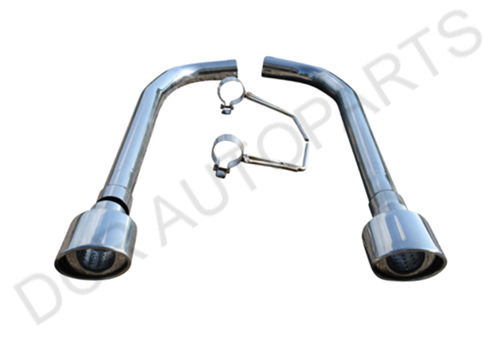 When I purchased my 2001 XK8 Jaguar in 2007 then 6 years old, I was tempted to buy one of the latest XK8 / XKR stainless steel exhaust systems thinking serious exhaust corrosion especially in Scotland would be imminent. It’s now May 2012 and the mild grade stainless steel is still holding together – when will it ever corrode out and I’ll have to replace it ? Jaguar appear to have got their exhaust system quality right at last !. However, the oldest XK8’s are 16 years old and time is taking it’s toll with systems starting to fail necessitating replacing all or some of the exhaust system.

I have had a Triumph Stag and Jensen Interceptor in the past and the sound from these V8 systems is intoxicating ! Lets face it, the original XK8 / XKR exhausts make the car sound too quiet and don’t exploit in sound the great power of the engine.

We are now selling the latest in full stainless steel performance exhausts but with my car until the middle silencer and over axle silencers fail, I am very tempted to try a rear sports exhaust system which are reasonably priced at around just £180 + shipping and VAT. I have heard the system on other cars and it gives the car a real sporting sound. They are easy to fit, just remove the old rear boxes and replace with the straight through system. The flush-fit appearance of the two oval stainless steel tail tips fit and fill the original cut-outs perfectly. The exhausts sections are available for both the 4.0 and 4.2 litre XK8 and XKR models. Fuel economy is apparently the same however I must admit I think there will be an increased tendancy to use your right foot to get the impressive growl !.

The stainless steel systems we now stock are a direct replacement for the rear boxes so if you did need to get replacement over axle and middle sections then we can supply. If you want to order, please advise if your car is a 1996 to 2001 or car or post 2001 as the brackets are different.

When I get a chance in-between sending XK8 / R and other Jaguar Parts to customers, this will be the next priority job on my XK8 Parts and job list !.

If you want to hear the impressive sound of the rear pipes on an XK8 from one of our happy customers in Italy, then CLICK HERE.