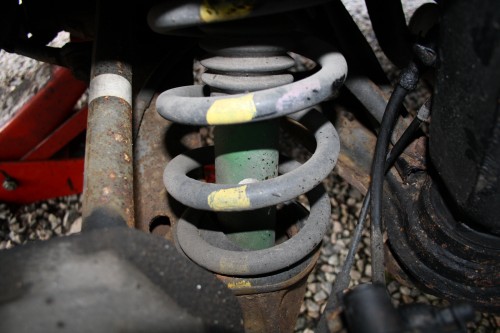 The Jaguar XK8 and XKR Rear Suspension system has generally worked well in service. The assembly and associated parts are based on the proven Jag X300 system which in turn was based on the older Jag XJ40 system. However problems are starting to present which the XK8 / XKR owner needs to be aware of.

The introduction of the CATS system was based on the older X300 rear suspension design. CATS manages and optimises the ride and handling of the XK8 / XKR car by means of uprated springs to increase the stiffness and electronic adaptive dampers under electronic control. Sensors at the front and rear of the car monitor the road and handling conditions and alter the electronic dampers to soften or stiffen the dampers. On start up the springs default to a stiffer setting and then under way on a smooth road, will soften. The settings will change in micro settings as braking, cornering and road conditions affect the car.

As with some other areas of the XK8 / XKR, changing the rear shock absorber parts is not as easy as it may look. Firstly, the rear suspension needs to be unbolted and lowered several inches. A special thin spring compressor is required to allow the release of the shock absorber from the spring unit. With the spring suitably compressed, the fulcrum pin can be removed which may well have seized in position. If this is the case, due to the severe lack of space in the area and the bottom of the spring compressor obstructing, this will have to be cut off with a small angle grinder

These are main problems reported to date.

You may also be interested in our Jaguar XK8 / XKR Parts Review relating to the common front suspension problems.